I was born with a birthmark on my chin.

I didn’t really care too much about it at first as a young child until adults started asking me if I’d been ‘kissing boys’ and ‘rubbing chins with boys’ – when I was 6. I started getting asked ‘what did you do to your chin? Is that a rash?’ etc. My mother also tried to cover it up with concealer & foundation, calling it ‘ugly’. That stuck with me.

I started feeling that I was ‘ugly’ because I had a birthmark. During all of this, I met an elderly lady in the hospital when visiting my grandmother, and she told me that a birthmark was a mark ‘left by an angel when you were born’. It probably does sound nonsensical but to an impressionable child that was comforting to hear. 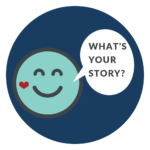 Over the next decade or so I battled thoughts of skin grafts to cover it up whilst I continued to receive plenty of comments on it. Eventually, I began to realize that this birthmark was what marked me out as being unique. Nobody else had the exact same birthmark as me. It was time to be proud of it.

I still receive comments from time to time, but now I just explain to people what it is instead of getting upset and self-conscious. I’m also more comfortable in myself, and I remember the old lady’s words from time to time. They still help. Don’t be afraid to be you.